How hypnosis could be a mainstream resource for those seeking help with behavior modification.

“Psychotherapy that is concerned with the treatment (as by desensitization or aversion therapy) of observable behaviors rather than underlying psychological processes and that applies principles of learning to substitute desirable responses for undesirable ones (as phobias or obsessions) —called also behavioral therapy, behavior therapy.”

The word behavior in this usage seems to imply something we do that we do not want or do not like to do.   There are good behaviors, however this paper addresses those annoying “bad” behaviors and how to stop them.

Some of those annoying behaviors are:

What are yours? If you have tried to stop and wonder why it is so hard it is because behaviors are unconscious and therefore not something you do consciously because you decided to do so.

The conscious vs. unconscious

Below is a simple illustration to explain the functions of each “part” of the brain. The conscious mind is the “thinker” its job is to analyze and decide. Then, the unconscious, or subconscious, is the “doer” its job is to take the thought and express (or act on) based on the imprints you have been exposed to. If the thought can’t be carried out, why you can’t stop doing something, it is because the subconscious is not set up to do that. 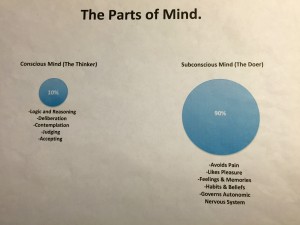 Here are the five ways the subconscious gets set up?

If your parent has an anger issue you may more easily adopt this trait as well and consider a permanent trait.

If you were bit by a dog as a child for example, you tend to grow up fearing dogs well into adult hood, even if you now rationally no all dogs are dangerous.

Parents, clergy, and teachers impart information which we consider truth because of the authority role they are playing.

Based on this information you can see it is our environment that shapes us, this mostly takes place before age 12. However most of these can have an effect on you based on the level of intensity at any age.

HOW EMOTIONS/DESIRE PLAY A ROLE

The conscious mind decides based on rational information to stop a habit (like to stop smoking because it is hazardous to your health) and then the subconscious acts on that decision. However if the subconscious is wired to automatically carry out the old embedded action (to smoke in order to relax) the result is frustrating. This is why willpower doesn’t work.

You must address the need (or stronger emotion) to smoke before the subconscious can create a new positive behavior (the weaker emotion to stop due to health concerns).

HERE IS ANOTHER EXAMPLE:

If we posses a behavior like binge eating, you can bet there is a strong emotion of self-loathing or the like behind it. But, if a person can weaken that negative emotion (leading to the desire to overeat) and strengthen a new positive emotion, such as “I’m deserving and take care of myself,” then they can more easily transform their “bad” behavior or habit.

When a person wants to change a behavior, there is always an outcome. For example, dropping 50 pounds would enable that person to have more energy, wear new, loose fitting clothes, or to become active in a sport like tennis.   Attaching a feeling or strong visual is a motivator that works to advance this process. This desire (to achieve the outcome) helps the person overcome the old emotion, to make it weaker, so that the natural expression is to just eat normally.

Additionally, when a person gets an urge to eat the wrong foods, or too much of a good food, they stop and acknowledge the feeling or urge, by saying, “Yes I want to eat right now, that has been my way to dealing with (my low self worth) in the past, but, because I want to play tennis (strong motivator), I take 2 deep breaths and refocus my attention.” Then say an affirmation, like “I show love for myself by eating a small amount of good food.”

The above process is designed to push the old idea down every time it comes up, thus weakening that idea. However, one’s belief in this process or belief in the new statement or idea is vital to long-term success.

Are you certain or doubtful about your ability to reach your goal? I ask because the Law of Dominate Effect is at play in that question. If you are certain with the utmost certainty then you will most likely succeed and also, if you are doubtful, fully certain you are doubtful than you will not succeed.

When we are really certain about something, doubt is absent; conversely when we are doubtful, certainty is absent. This is how this law of mind works, we can’t be both ‘Certain’ and ‘Doubtful’ about something. Whichever thought has the strongest emotion behind it, will be the one that is activated.

Stronger emotions tend to replace weaker ones.  Attaching a strong emotion to a suggestion tends to make the suggestion more effective.

It is my wish that you understand why it is hard to stop a behavior and how important it is to appeal to the subconscious in order to transition easily to a new behavior. Fear is a motivator for a lot of change, this information shows the various ways that works.

Here is an example:

When a person is having a pleasurable emotional experience and danger is imminent, the stronger emotion of danger displaces the pleasurable one, which disappears instantly if the danger is pronounced.

A child slams a door on his finger and his mother says, “I’ll just kiss it and the pain will go away.”  Here the mere touch of a mother’s lips becomes the more dominant suggestion and makes the finger feel better.

Personally, I would rather leave fear out as a motivator for behavior change in favor of developing a new future perception of how a person wants to be. When it comes to changing a behavior whether you choose a fear based or a positive outcome based motivator, there are many ways to go within that.

Most of the following options focus on appealing to the conscious mind and require focused-attention, consistency and repetition.

Hypnosis is one of the most effective ways to change automatic responses or actions, in an effortlessly way. That is because the subconscious drives the actions and when the subconscious is programmed with a positive response that is the neural pathway it follows.

I am choosing to write about why hypnosis is the most effective tool for permanent behavior change. As stated before, hypnosis affects our automatic responses, in a way, right now you have been hypnotized through past experiences to react or behave the way you do when triggered by outside influence.

A hypnotist with proper training (select someone with at least 300 hours of training and who is also certified and re-certified through continuing education) can guide the client into a trance state. In that state of mind the conscious mind has slowed down and the unconscious mind has become more active (below our conscious awareness). In this state a person is susceptible to new positive and purposeful suggestions stated by the hypnotist in either a direct or indirect fashion. The hypnotist does a suggestibility evaluation to determine the best approach for that person. A hypnotherapist additionally can aid the person in a deeper hypnotic therapy to resolve “stuffed down” feelings. This is imperative for lasting behavior change. Merely imposing new direct suggestions in this state, in my opinion is only a band-aid. Doing hypnotherapy gets to the root of the problem.

Here is an illustration of the phases of mind one goes through each day. Keep in mind that when in Alpha state, hypnosis can occur and this state is the same state we are in while watching TV, a movie, daydreaming, or driving long distances.

This illustration shows the phases of consciousness we all go through each day from our wakeful state (Beta) to our sleep state (Delta). The two states in between are the states in which hypnosis occurs. Hypnosis only occurs when the subject accepts the suggestion.

Here are some other facts about being in a state of hypnosis:

As a matter of fact, the subject is in control of their responses and can decide whether or not to participate.

A BRIEF HISTORY OF HYPNOSIS.

Hypnosis was used successfully in the 1800s by the medical profession in surgeries where anesthesia was not available. The latent powers of hypnosis were used in the mind of the patient to refocus during surgery. In 1949, The Society for Clinical and Experimental Hypnosis was founded. It was expanded internationally 10 years later. The American Medical Association recognized hypnosis as a legitimate treatment method in both medicine and dentistry in 1958. To learn more, go to the American Council of Hypnotist Examiners website.

I encourage you to learn more about hypnosis. In my own life I have made rapid and lasting changes in the area of stress and anger management. Twelve years later those changes are still in tact.

Valerie A. Grimes is a clinical hypnotherapist assisting individuals in achieving an optimum level of support through positive thinking and by teaching new habits and forming new beliefs available through the process of hypnosis. She blends centuries old hypnotic practices with modern day neuroscience. Her office is located at The Flow Center in Dallas, her email is Valerie@theflowcenter.com.