The Brain and Body are Talking: Hypnosis To Join the Conversation. 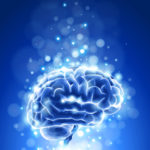 Mention hypnosis at your next gathering and witness the response ranging from anxiety to excited anticipation.

Here is another conversation starter: The body is the subconscious mind, as declared by Candace Pert in her groundbreaking book Molecules of Emotion.

Before you agree or disagree there are two schools of thought on how our brains interact with the rest of us: The electric brain and the chemical brain.

The old model: electric brain
How it works: Information jumps from one neuron to the next across synaptic cleft with message of On or Off.

EXAMPLE: Trying to find a flashlight in the dark.

Body Response: Opening a drawer, feels around… “no that’s not it, go that way, closer, closer, over here? No, this way, it must be this way…ahh there it is.”

Thought Response: Why did the lights go out? I need to put my flashlight in a better place. (Actually there were several emotions of frustration or fear in the above, but that didn’t have anything to do with the brain in the electrical brain theory.) The theory is that those interactions have little or no effect on our bodies. The old model is basically a view of the brain as mechanical.

The new model: chemical brain
How it works: This model has more participants: Cells, Receptors and Ligands. Ligands are neurotransmitters, steroids, and peptides. The cell is engine the receptor is button to start engine and ligands (neurotransmitter, peptides) pushes the button. Theory: Body Response and Thoughts are simultaneous.

EXAMPLE: Being exposed to the aroma of coffee.

Thought Response: What’s that I smell? Coffee! (nostrils flair) And there is my favorite red mug, I love that mug I got that when we were on vacation, (heart beats faster), I remember when we had coffee at that little sidewalk café, (smile appears) peptides flowing, (I feel Happy).

This theory views the brain and body as more of one unit. And as Pert suggested, the body is like a second Central Nervous System.

Maybe it is both electrical and chemical?

In her book, Pert uses the examples of theories of Walter Cannon (a physiologist at Harvard Medical School in the first part of the 20th century) and William James (an 19th century psychologist).

Pert said it could be both. Based on her work and observations there is a two-way street of communication always occurring between the body and the brain. However even in the late 1970s and early 1980s (during her career at NIHN) most scientists didn’t want to hear anything about emotions and the brain, because the brain was still viewed as only mechanical.

As she continued her research Pert believed strongly that the body can be healed with the mind and the mind can be healed through the body and had the research to back this up. She left the scientific world and began to speak at Mind/Body conferences after she met Depak Chopra and a few other mind/body gurus.

Health or disease is always being communicated

My friend was ill recently. When there would be a pain she would grimace and think she was experiencing a renal cyst again. She would tense up, hold her breath and think about the cyst invading her body. I told her she had a choice. Instead, when she had the pain, she could begin deep breathing, look at the image of the beach (which was hanging on her wall) and think of the sun, water, and sand how they felt and sounded and allow her body to feel that peace and relaxation. I asked, “Which sounds better?” “The beach,” she said.

Was she communicating to her body? YES.

You always are. Whether you are sending thoughts of an invading cyst or the feeling of sand beneath your feet, there is always a response to that thought. The question is how do you think your body is responding to the thought that a cyst is growing in your body? The same response you get when you think of a scary movie and your heart quickens. Thinking about the growing cyst encourages that very thing.

How hypnosis joins the conversation.

Because hypnosis occurs at a subconscious level it is an efficient way to get in on the cellular communication between mind/body, body/mind. Creates a state of awareness in order to self-monitor what is happening in the body and to encourage health and well-being. Perhaps that means we could be intelligent systems able to create our own level of health.

So what is your body communicating to you today, would you like to join the conversation and take back your natural ability to be healthy and enjoy emotional well being? Let’s meet soon.


This article is from the Valerie Grimes archives and is one in a series to be featured over the next six weeks connecting hypnosis and biology. In a way…A ‘BACK TO SCHOOL’ SPECIAL.